Often, when you add something that builds up the surface of a wall - like tile or wainscot - you'll need to make adjustments to your electrical outlets and light switches.

For example, here is an entry-way project that involved electrical components in two spots - the light switches above and the outlet below (see arrows). 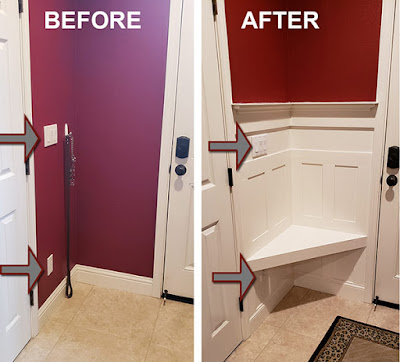 In this post, we're going to look at the outlet near the floor and the adjustments that had to be made to make it even with the new batten wall surface.

Here's how the outlet originally looked on the red wall without the cover: 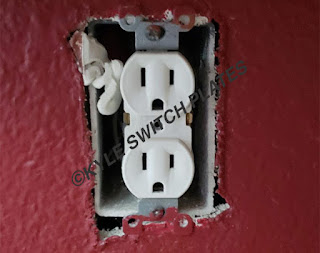 In order to add the new flat wall surface for the board and batten entry project, a cutout had to be made to fit around the outlet. 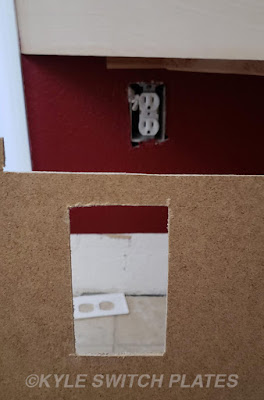 Note: Cutout should be the size of the electrical box - not larger. 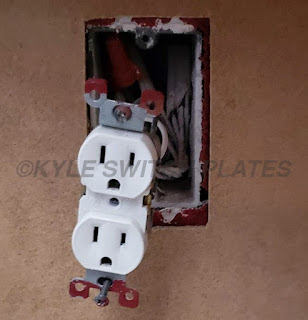 Note: Hole was cut much too large.

As a result, the cutout ended up a little too big.

For safety, a non-conductive plastic goof ring should be installed between your device and the new surface.

A goof ring was placed underneath the outlet, but the hole in the board was still too big. The proper installation involves the goof ring resting on top of the new surface all the way around.

You can see that that bottom still doesn't rest on the new surface as it should. Grr. 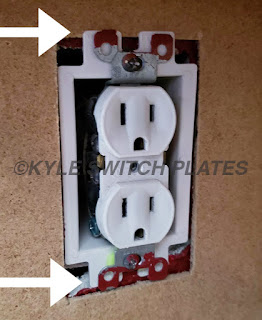 To lift the bottom up, one spacer was placed around the screw holding the outlet into the bottom of the box. 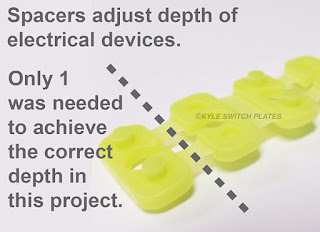 Spacers can be cut or stacked to achieve depths in 1/8" increments. 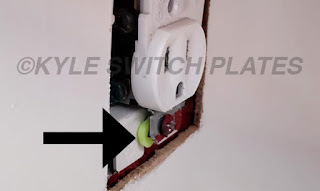 That did the trick! 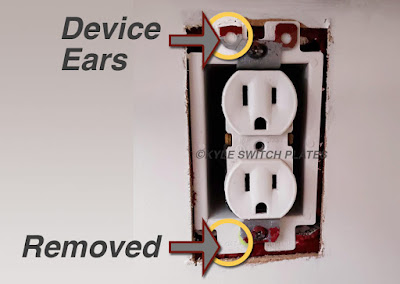 As an added safety precaution, the device ears were snapped off on the bottom to prevent them from making contact with the board.

The cover was added, and the outlet is no longer uneven - it sits properly in the plate & looks great. 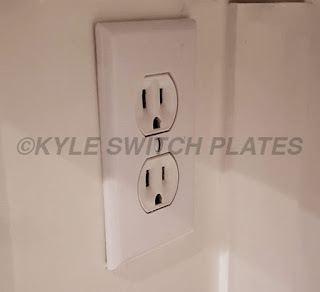 Tips for Cutting the Right Size Hole for Electrical Devices

When adding a new surface over a wall, such as tile, wainscot, board and batten or paneling, be sure to measure very carefully when cutting the openings for the electrical devices.

It's best to cut an opening that's too small to start with, then hold it up and adjust as necessary.

Try to cut an opening that's the same size as the electrical box, rather than basing your measurements on the devices or cover plate.

You don't want your new material to overlap the box, but still want the tabs (or ears) of your electrical devices to reach over the new surface (with a box extender ring in between).

In this entry way project, the hole for these 3 switches was cut slightly too big, but worked out fine once the goof ring was installed under the devices.

What to do if you cut too big a hole around an outlet or switch:

If your cutout is too big, the devices will sit sunken down in the space and the cover plate might not be large enough.

For sunken devices, use spacers to build them up.

For covers that aren't big enough, get an oversized cover plate.

Posted by Kyle Switch Plates at 1:09 PM No comments: